The Hand Of Plato

The Hand Of Plato

The Gallery will showcase an original sculptural artwork by the esteemed Dr Rhyl Hinwood AM. The artwork, currently in production, will show the hand of Plato with each of the five Platonic Solids balanced on a different fingertip. The Platonic Solids are geometrically sacred objects and have fascinated mathematicians and non-mathematicians alike for many centuries. Early descriptions of the solids likened them to the fundamental elements of nature: fire, air, earth, water and the universe itself. According to these texts, each solid had a different meaning: the tetrahedron was the lightest solid so rose like fire; the octahedron, rotating most easily when held between opposite vertices, corresponded to the mobile air; the cube, with its stable base, represented earth; the icosahedron, having the large volume, represented water; and the dodecahedron was the universe as a whole.

The solids are supported by the aged yet energetic hand of Plato with fingertips thrusting upwards into the sky. Plato contributed enormously to the birth of philosophy and logical reasoning, and is often dubbed the guardian of knowledge.

The order in which the solids appear on the fingertips has been carefully considered. The most basic and lightest solid, the tetrahedron, sits on the little finger. The ring finger balances the octahedron, being the shape most characteristically associated with a diamond crystal. The middle finger balances the cube, since this object most accurately resembles the centrality and balance of earth. The index finger balances the icosahedron. And finally, the thumb balances the largest of the five sacred solids-the dodecahedron. This shape represents both the vastness of the physical universe and the universality of human knowledge. 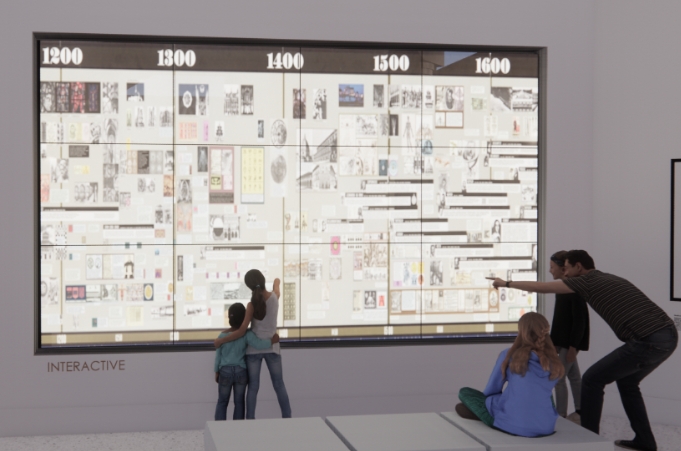 Currently in development is the Interactive Board which will be a must-see display at the Mathema gallery. This large digital piece will serve a range of different functions and be available for visitors to interact with and learn more about the wonderful history of mathematics.

Watch this space as more information about the Interactive Board will be revealed leading up to the opening of the Mathema gallery.

Plan your trip to the Mathema Gallery. Construction of the Gallery begins in 2022.