Visitors can learn more about mathematical ideas and mathematicians through the Gallery Guide worksheets. These worksheets are designed to be fun and challenging exercises that further explain some of the displays and interactive items of the Mathema Gallery. 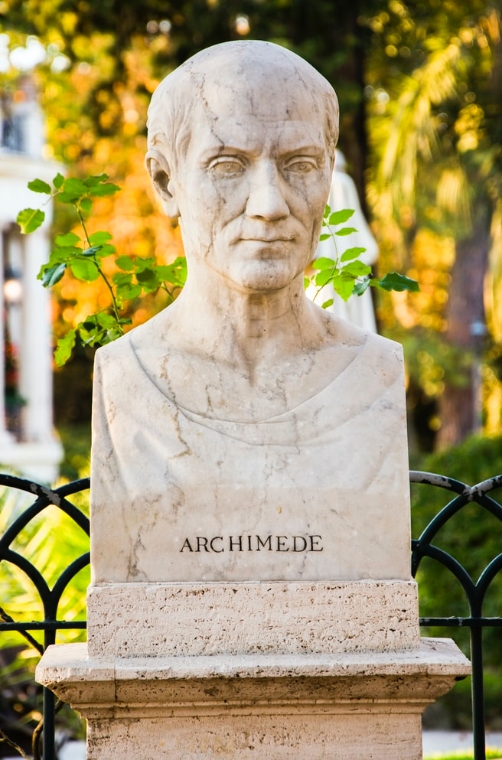 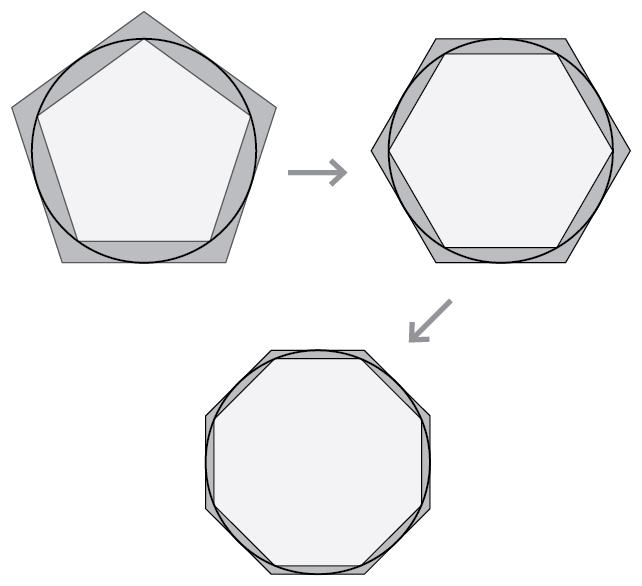 Archimedes lived in Syracuse on the island of Sicily which was a Greek territory during that time. He is universally considered one of the most creative individuals that has ever lived; often ranked with Newton as a supreme mathematical genius (Hollingdale, 1989). He is known best for his novel discovery of the law of buoyancy which supposedly caused him to streak naked from the public baths. Archimedes is credited with inventions such as the compound pulley, Archimedean screw used to raise and move water, and powerful levers that were often used to build war machines.

Archimedes achievements were amazing give that mathematical notation was very limited during this era. Like all of the Greek mathematicians, Archimedes solved problems using geometry. Algebra had not been invented and the number system was antiquated. So, problem solving was slow, challenging and required immense powers of concentration.

The activities in this Gallery Guide relate to some interesting contributions Archimedes made that are less well known but very novel. 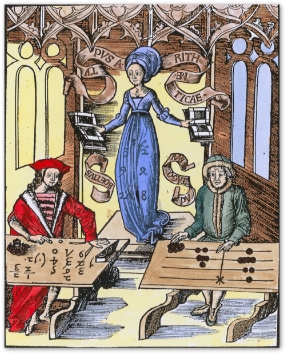 When we think of numbers, we tend to do so quite naturally and unthinkingly. Almost everything we do - from learning to tell the time to knowing how old we are - is dictated by numbers. The counting system we use today-comprising the familiar set of digits from '0' through '9'-has become so set in our minds, cultures and educational systems that we rarely pause to consider its historical origins. Where did these symbols come from? Who invented them? Where would we be without them?

Archaeological evidence suggests that humans could have been counting as far back as 50,000 years ago. Early human societies had unique ways for counting and representing value, such as matching the number of pebbles or sticks with whatever they were trying to count. At Mathema, learn about where today's counting system first emerged and how it ultimately made its way to the Western world. Find out about its long road to universal acceptance, and how the system clashed with other popular methods of counting such as the Roman abacus system. 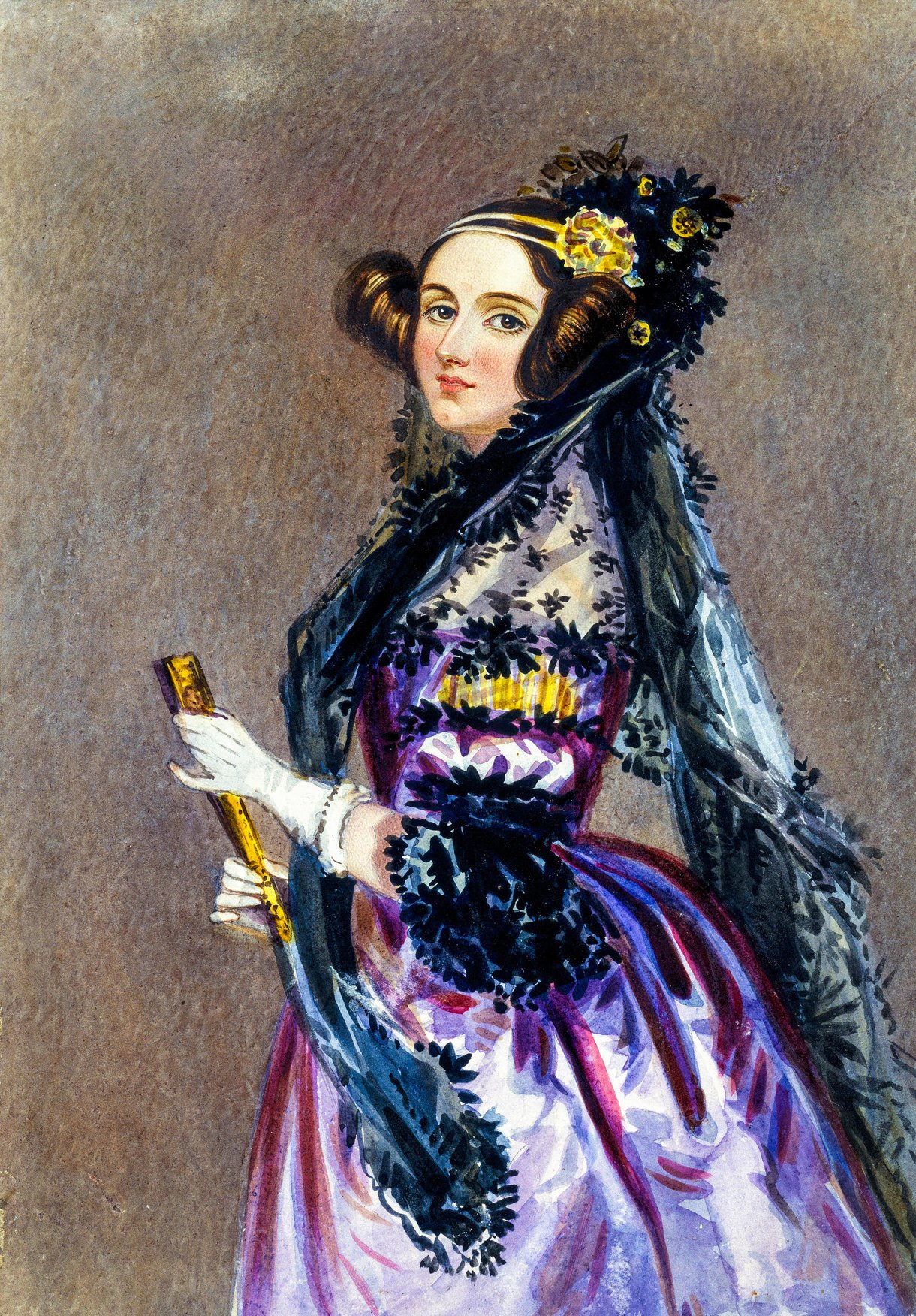 The advent of computer technology is one of the most remarkable milestones in human history. Nowadays, computers are used in almost all professional spaces and nearly all school curriculums require students to learn essential skills in computer use. Without them, we would still be grappling with difficult equations by hand and sifting through thick books and manuscripts to find information we can now access with the click of a button. Having computers allows us to do these same tasks at half the speed, and with double the accuracy.

At Mathema, learn about the brilliant mind of Ada Lovelace - one of the earliest pioneers behind computer technology. Building on Charles Babbage's idea of a difference engine, Ada was instrumental in designing the first general-purpose computer with the same basic mechanical and logical structure as the modern-day PC. It was the first time that the idea was floated for a mechanical device which could compute algorithms and perform a range of simple arithmetic calculations. See how Ada Lovelace helped usher in the technology age and even had one of the earliest programming languages named in her honour. 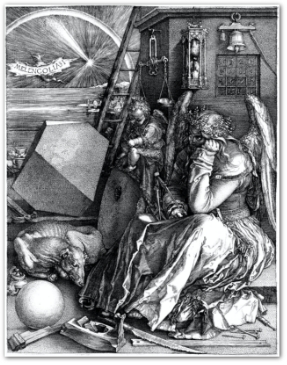 Albrecht D�rer is one of the most famous artists of the German Renaissance period. One of his most well-known works is this print which he created in the year 1514. It continues to captivate viewers with its visually intriguing and conceptually challenging themes.

The name of the piece is Melencolia I, which carries a connotation of sadness. One interpretation of Melencolia I is that it reflects the perpetually unsatisfied mind of the mathematician, who can never fully succeed at perfecting his craft. Even with its melancholic sentiment, the artwork is paradoxically a celebration of mathematical genius. This is evidenced (among other things) by the iconic magic square displayed in the top right corner of the frame. At Mathema, learn what gives this 4x4 grid its magical reputation.

Learn more with the Gallery Guide activity sheets available at the Mathema Gallery.
Visit the gallery and see the display. Plan your trip.
× 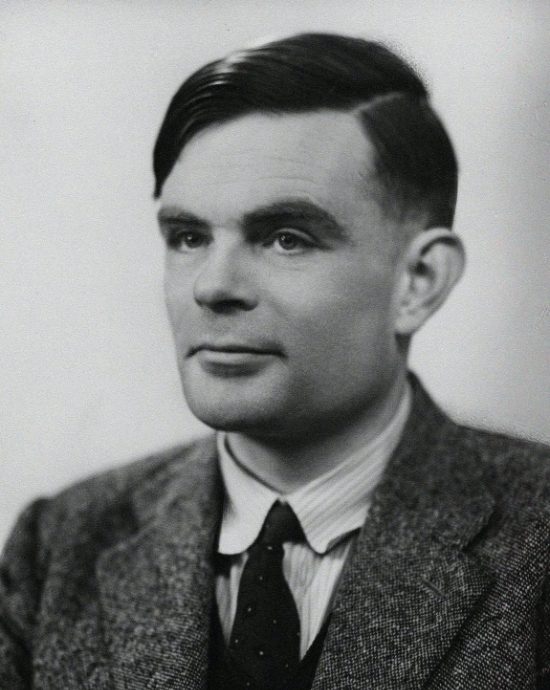 While the Second World War is undeniably one of the greatest tragedies in human history, not all stories that emerged from it were ones of devastation and loss. There were also the fantastic stories of success, bravery and strategic victory. One such success story was that of Alan Turing, a British genius who was instrumental in decoding secret 'Enigma' communications which were being used by the Germans to guide their military plans. The intelligence uncovered by Turing was central to Britain's war effort, with some suggesting it could have shortened the conflict by up to two years!

Turing, however, was more than just a codebreaker. He was also a mathematician, philosopher and computing pioneer who grappled with the fundamental problems of life itself. His ideas have helped shape the modern world, including early computer programming and even the seeds of artificial intelligence. This exhibition offers an absorbing retrospective view of one of Britain's greatest 20th-century thinkers.

Some mathematical propositions throughout history involve such technically rigorous methods of proof that they have never officially been solved. One such proposition is the Riemann hypothesis which was first postulated by Bernhard Riemann in 1859. The Riemann hypothesis is of great interest in number theory because of what it tells us about prime numbers and their distribution.

As a concept, prime numbers are relatively straightforward to grasp. They simply refer to those numbers >1 whose only positive divisors are 1 and itself (e.g. 2, 3, 5, 7, 11...). Although the concept of prime numbers is one that most of us grasp in elementary mathematics class, the pattern by which primes occur from 1 through to infinity is much less understood. The Riemann hypothesis is one of the seven 'Millennium Problems' laid out in 2000, with a $1 million bounty for anyone capable of solving it.

At Mathema, learn about the awe-inspiring career of Ken Ono and his role in devising a criterion which implies the Riemann hypothesis in most cases. See if you can build on Ono's legendary theorems to find a conclusive solution to this 160-year-old mathematical mystery once and for all. 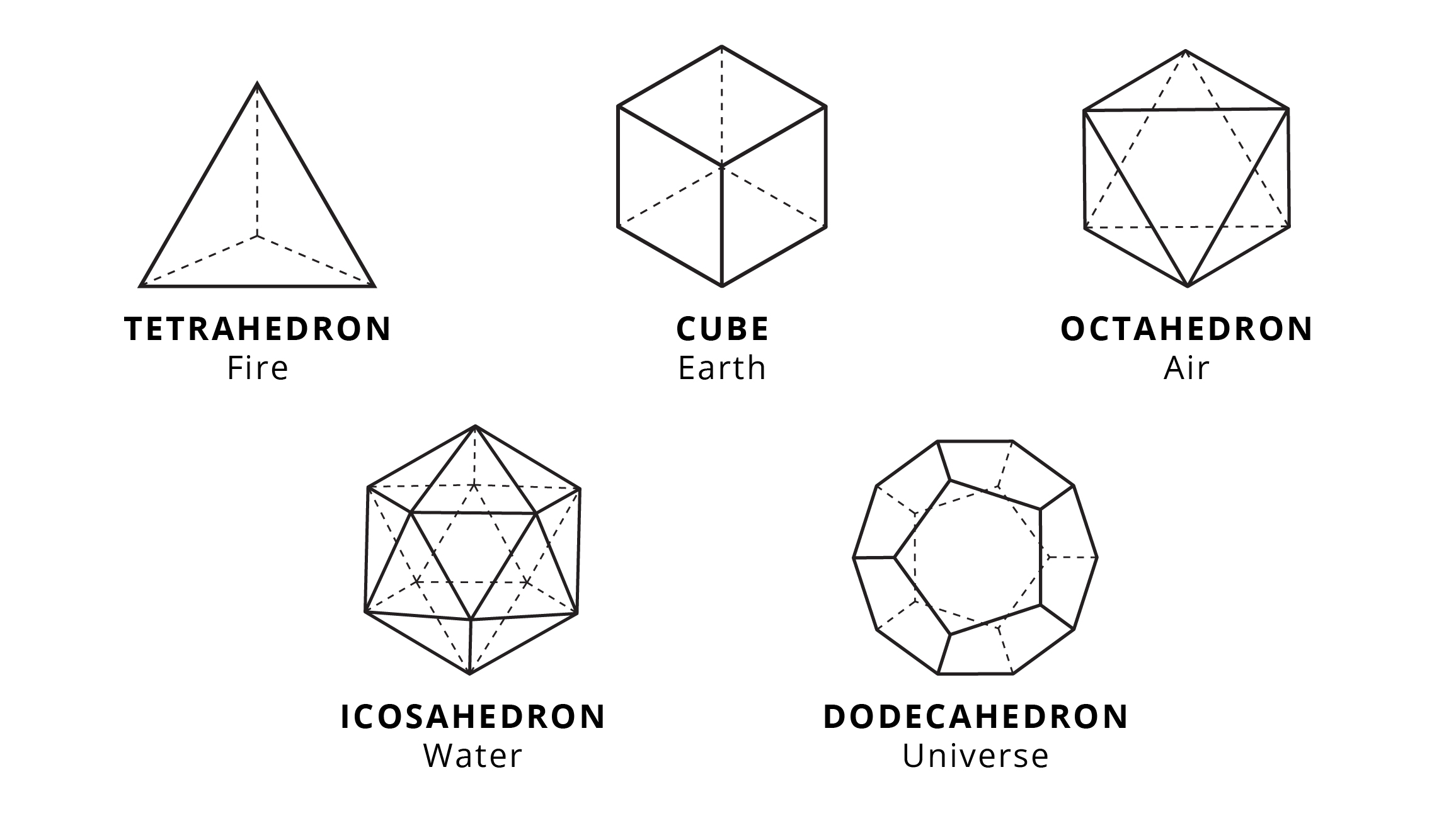 The universe is made up of shapes. If you look at your immediate surroundings, chances are you could describe most of the things you see in terms of their structure or shape. The mobile device you own; the plates that you use to eat breakfast; even the computer monitor you are now reading from - these are just a handful of examples of the daily contact we have with the shapes of our universe. Some of the shapes we encounter come in simple two-dimensional forms (like squares and circles), while others are slightly more complex three- dimensional structures called polyhedra. Polyhedra come in many shapes and sizes (no pun intended), and can include anything from pyramids to prisms of all sorts. One rather special group of polyhedra are the Platonic Solids.

At Mathema, learn about how the Platonic Solids were used in early philosophical accounts to describe the essential elements of the universe. You will also find out what makes the Platonic Solids so special, and why there are only five such structures known to exist. The answer is simple: it is all about geometry! 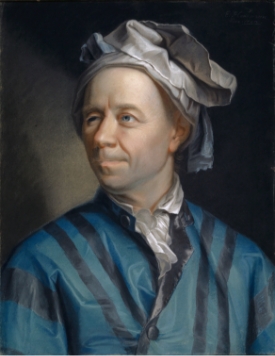 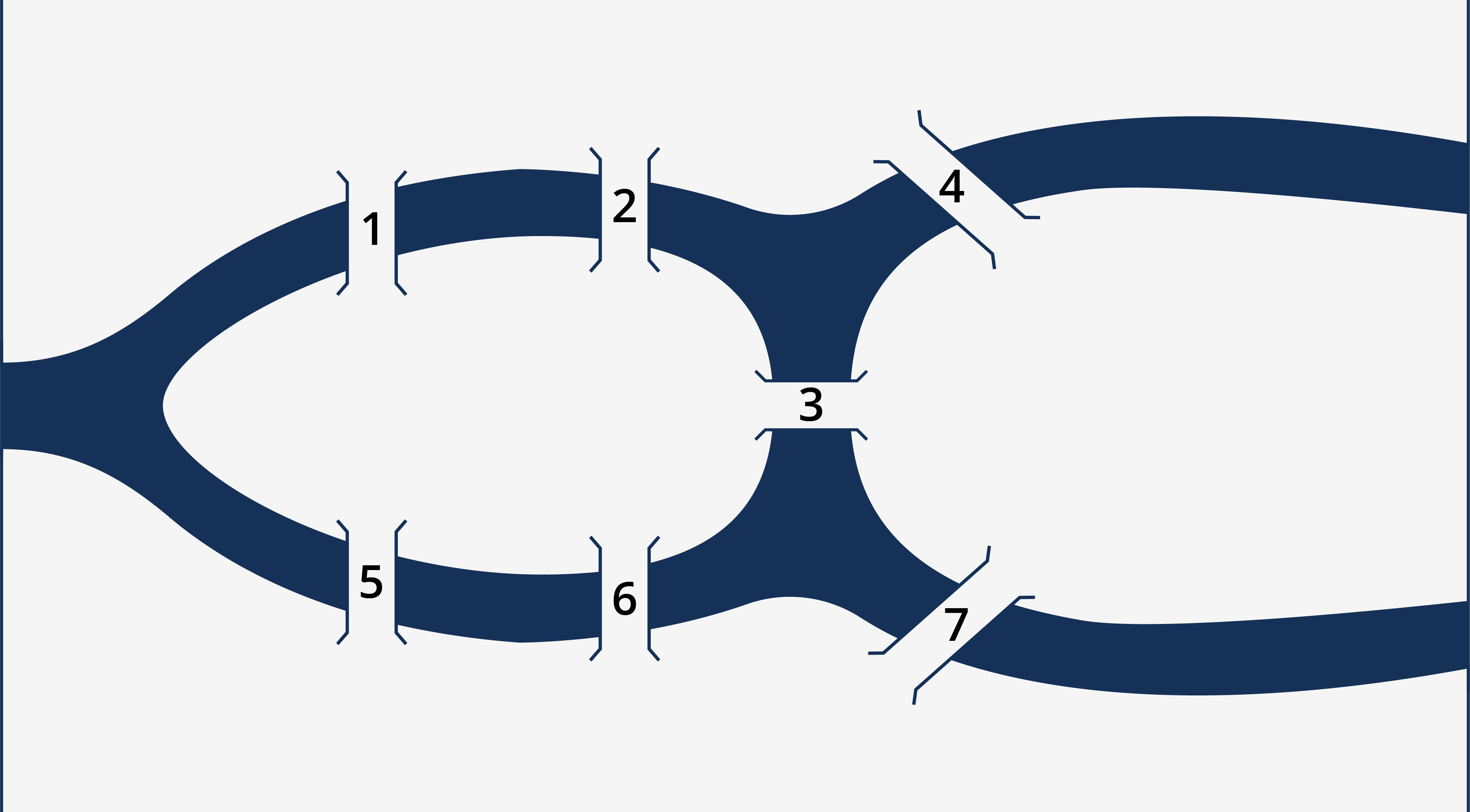 Born on April 15, 1707, in Basel, Switzerland, Leonhard Euler was one of mathematics' most pioneering thinkers. He established a career as an academy scholar and contributed greatly to the fields of geometry, trigonometry and calculus, among many others.

Euler's name is also often credited with the famous Konigsberg Bridge problem. Besides laying the foundations for modern-day graph and network theory, this problem was presented to Euler as a mathematical puzzle set in the old Prussian city of Konigsberg (now Kaliningrad, Russia). The task for Euler was to see if a single line could be drawn to connect the various parts of the town without crossing any bridge more than once. Though a historical recreational puzzle, the applications of the Konigsberg problem are still relevant today, as seen in transportation routes, communication channels and even the flow of electrical currents. At Mathema, delve into the secrets of Euler's mind and see whether he was ultimately successful at solving this historical mathematical problem. 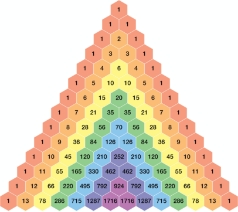 Although Pascal's triangle owes its name to 17th century French mathematician Blaise Pascal, the history books suggest that the triangle originated in China as early as the 11th century. Pascal's triangle is one of the most compelling number patterns in all of mathematics. Some patterns are easy to find and apply, while others are more hidden and complex. Even though some of these patterns were detected many centuries ago, they continue to be applied by mathematicians and students to solve problems from algebra through to probability.

At Mathema, see what fascinating patterns emerge from Pascal's triangle. Immerse yourself in a world of discovery that will take you from figurate numbers to the Sierpinski fractal, and everything in- between. You can even 'try your luck' on the 'stepping stones' game to see how the overlap between probability and Pascal's triangle plays out in real life!

A Gallery Guide activity sheet is available at the Mathema Gallery to learn more about Pascal's triangle.
Visit the gallery and see the display. Plan your trip.
× 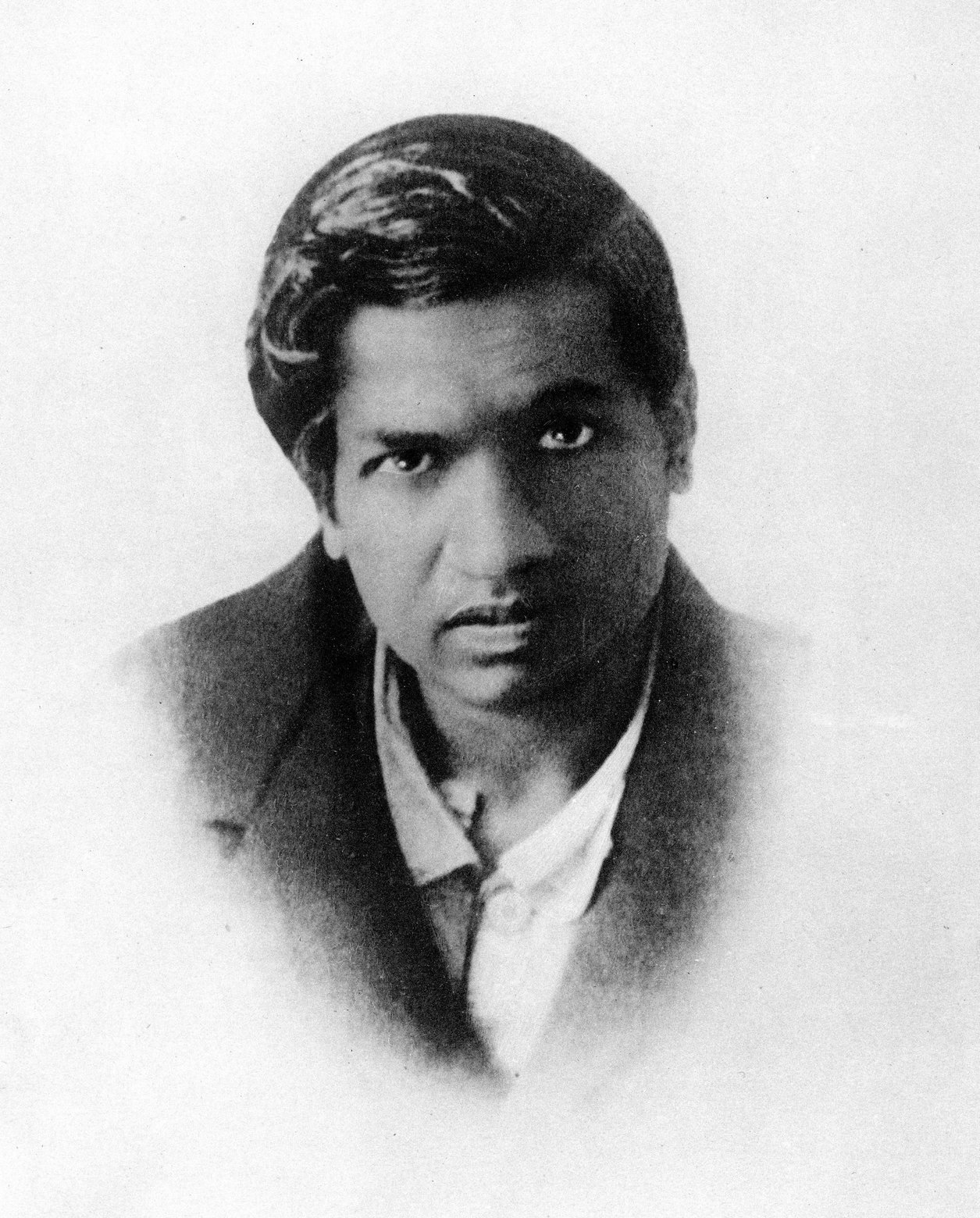 The story of Srinivasa Ramanujan is one of true 'rags to mathematical riches'. Ramanujan was a prodigy who came from a small town outside Madras in South India. He came from a very poor family and had virtually no formal training in pure mathematics. The rise of this mathematical genius is a story of great success and the triumph of perseverance and intellect in the face of all the cultural, economic and racial resistance that stood in his way.

Not many people in 20th century India who came from such backgrounds would go on to make a lasting impact in the world of mathematics. Ramanujan was an exception to that general rule, his aptitude for numbers catching the eye of notable Cambridge professors and eventually winning him a prestigious collaboration with English mathematician Geoffrey Hardy. While Ramanujan understood numbers in highly complex ways, his methods for working with them were unorthodox and cryptic to most. He had the ability to come up with ground-breaking new theorems without necessarily knowing how he got there. Many of Ramanujan's theoretical propositions have since been proven to be correct.

At Mathema, you will have the chance to see mathematics through Ramanujan's eyes. See if you have what it takes to solve Goldbach's conjecture, and put Ramanujan's theory of partitions to the test.

Learn more with the Gallery Guide activity sheets available at the Mathema Gallery.